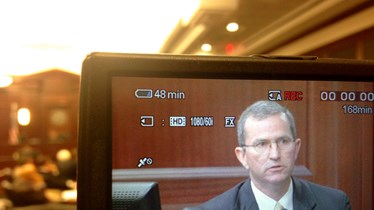 Fifth District State Attorney Brad King, who has represented west-central Florida since 1989, owns a condo at Heron’s Landing on Beach Boulevard. He is by far the most recognizable person to testify, but his story was similar to that of other owners at the development.

He described a litany of problems, including roof leaks, stucco fixtures falling off the house and problems with the air conditioning and electrical systems. He said he did considerable research before he bought the condo in 2007, and relied in large part on DR Horton’s size and position on the New York Stock Exchange when he decided to buy from them. “Because of their size …part of my idea was if DR Horton is this big corporation that builds all over, they are going to have construction managers on site checking to make sure everything is done the way it’s supposed to be done.”

King said he ended up being disappointed in his purchase, which he says is no longer worth what he paid.
King joins a parade of witnesses who have attested to a range of construction defects at the 240-unit Heron’s Landing. The focus of the case is cracked stucco, leaking roofs, and failing windows and sliding glass doors, but residents have complained about poor soundproofing, poor drainage, poor performing air conditioning, broken plumbing, even garage doors falling off. Attorneys for the plaintiffs say DR Horton failed to supervise construction and monitor its subcontractors, resulting in homes that violate Florida Building Code.

The company disputes that, arguing they hired reliable subcontractors, and that all of the buildings passed inspection and were certified by the city of Jacksonville.

The lawsuit, filed in 2013, is unusual because construction defect claims are typically handled in secret arbitration proceedings. Virtually every new home contract prohibits owners from suing in open court, and instead forces them into a closed hearing with the builder. Because this case was filed not by individual condo owners, but by the condo association, the claim is freed from those limitations.

Attorneys for D.R. Horton declined to discuss the case. A spokesperson from the company’s Texas headquarters said it is company policy to handle all media inquiries in writing, but they issued the following statement:

D.R. Horton is committed to superior customer service and providing families with quality homes and neighborhoods in North Florida. While we do not believe the community has the construction defects alleged in the lawsuit, D.R. Horton intends to fully cooperate with the legal process.

The lengthy and complicated trial began with jury selection on April 12. The Duval County Clerk of Court summoned an extra large jury pool—150 potential jurors to fill six seats, with three alternates – in part because the DR Horton name is on so many local developments. In fact, the original judge in the case, Karen Cole, had to recuse herself because her assistant lives in a DR Horton home.

The trial portion of the case was initially projected to last four weeks, but all parties now concede it will take longer. Circuit Judge Jim Daniel told jurors Thursday that they would need to discuss contingency plans for work and family responsibilities. Friday, the bailiff said all jurors would be able to accommodate the extension.

There will be no court Monday, due to the death of one of the laywer’s relatives.

New Home Nightmares: Part 1 – The tip of the iceberg
Scroll to top